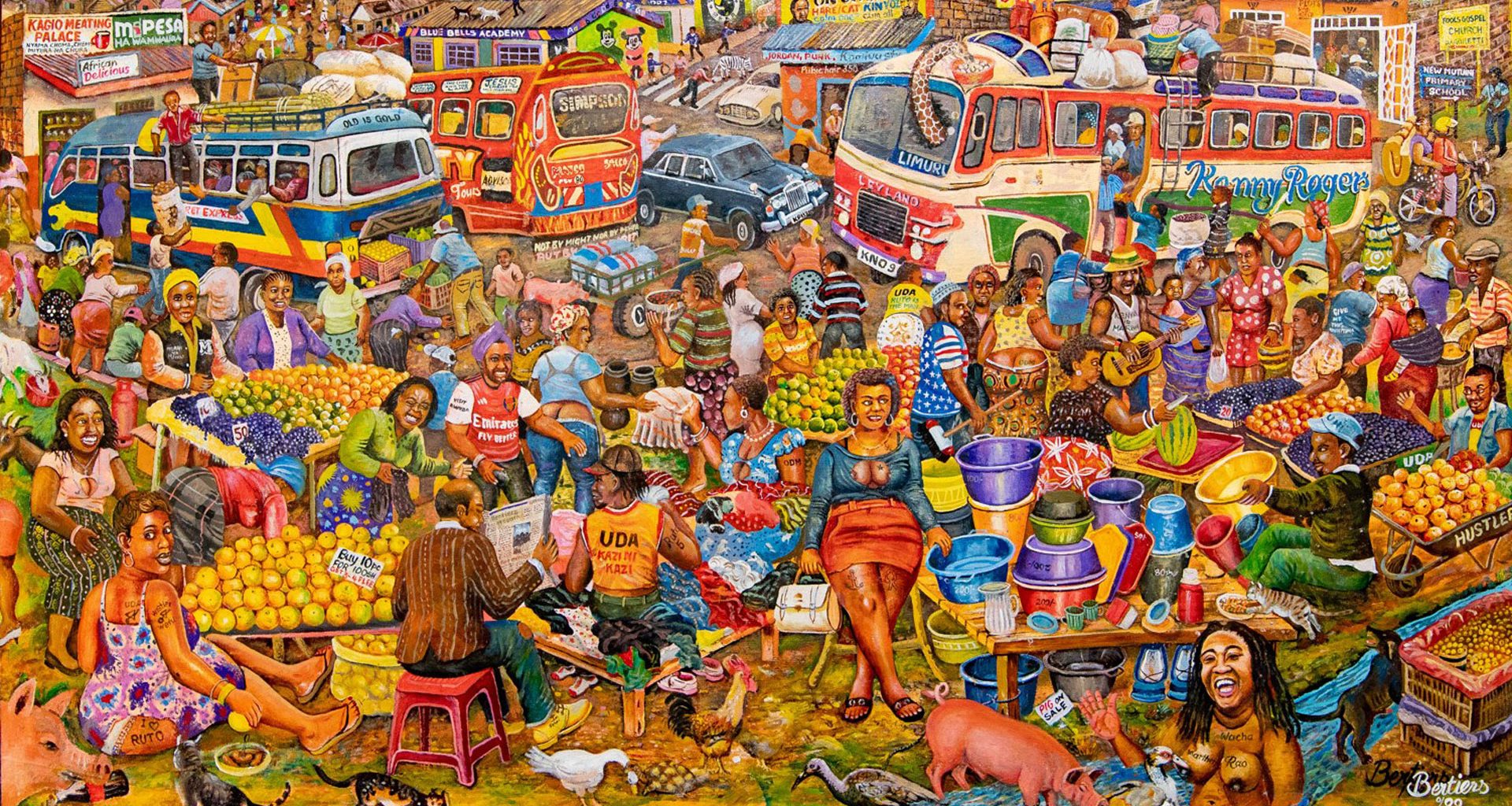 Walking through the “Sarakasi za Siasa” art exhibition by Joseph ‘Bertiers’ Mbatia, my breath couldn’t help but be taken away by how meticulously detailed the paintings showcased are. 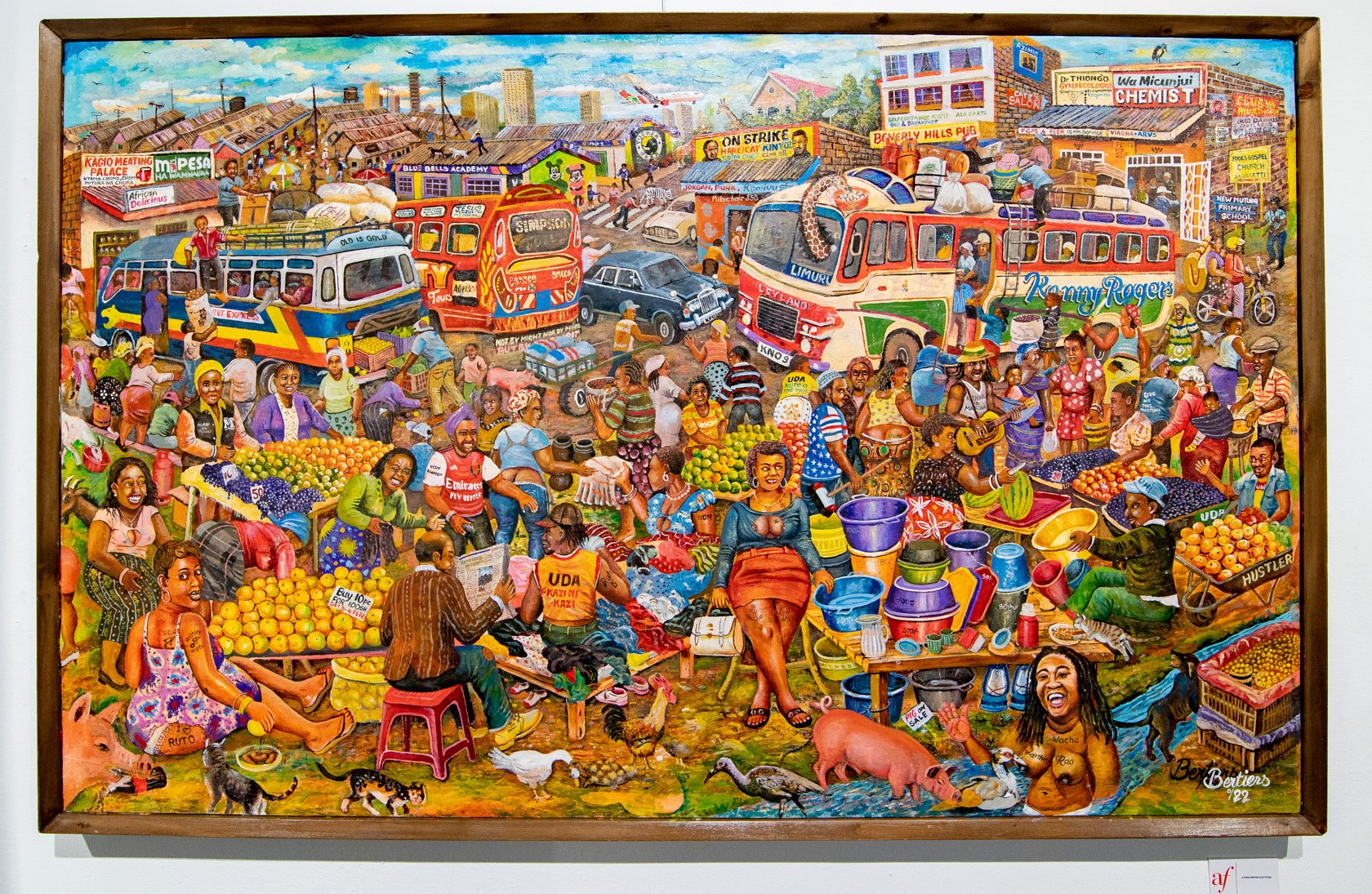 Meet Joseph Mbatia aka Bertiers: master painter, sculptor and; I dare say; Guru. He is the genius whose brainchildren currently grace the walls and adorn the floors of Alliance Française de Nairobi.  In this exhibition, he dazzles his audience by carefully capturing Kenya’s contemporary political climate using comics and cartoons. But no, this is not your typical political caricature you are accustomed to finding within the pages of the printed press. It is way more than that.

“Sarakasi za Siasa” is a Swahili phrase directly translated to English as “The Circus of Politics.” Bertiers presents us with the everyday happenings and upheavals in our society as well as the bigotries and implications of Kenyan politics. The lucid critiques of politricks as depicted are a true representation of the general attitude towards politics and politicians shared among Kenyans. He does so in a palatable, almost satirical manner. His work has a distinctive edge and is an honest characterization of political illustration in Kenyan societies. 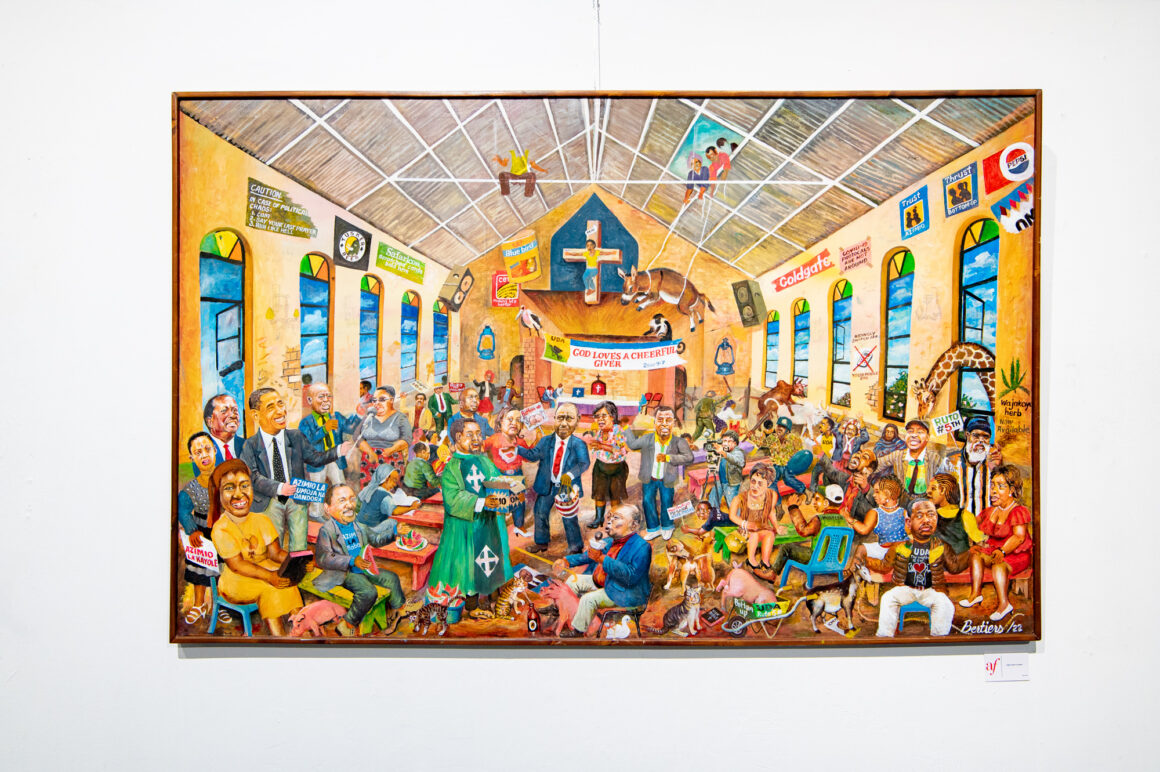 In layman’s language, the best way to describe the paintings exhibited is, “It’s a lot, a whole lot”—the array of activities, stories and imagery depicted in a single art piece stretch into absolute infinity. So much is going on. So much so, that they feel chaotic. He crams his canvases with several humorous minutiae that only a keen eye can take notice of.

It truly is heartwarming how homegrown Joseph Mbatia’s paintings feel. Very authentic to the Kenyan motif. There is so much to relate to. The themes evoked in his paintings and sculptures are familiar. The stories portrayed are a raw depiction of our localities. The good, the bad, the ugly: it is all in there. An unadulterated Kenyan Experience.

The contexts by Bertiers in his works are mostly cast around mayhem, confusion and disorder- and what better place to find these three if not the archetypal Kenyan soko (market)? There is an African saying that goes,” Every marketplace has its own mad man.” Bertiers illustrates an abundance of madness and mania. You almost feel as though you can perceive the noise through the images if you listen closely enough. From the revelries of a local pub to the hustle and bustle of a PSV stage, from the famous matatu culture to the rumour-mongering mama mboga. Does the phrase “Daktari toka Kitui” ring a bell?

Witty captions, banter and the play of words

A kinyozi (barber shop) named ‘Hare Cat’,  a bus with the words ‘Azimio la Barber’: a crafty spin on the original “Azimio la Baba”, a church called St. Judas Iscariot- to name but a few- are among the word plays Bertiers has flexed his mastery on. They are funny, witty and sometimes; with a hint of venom.

Cats and Pigs. Giraffes and Hyenas.

Let’s play a game, shall we?

Prominently featured in Joseph Mbatia Bertiers paintings are animals, especially cats. One can hardly miss them. If the perception I have built thus far of Bertier’s technique is anything to go by, you will decipher that he animates said animals in particularly peculiar contexts. Case and point:

Sculptures, forms and everything in between.

Besides canvas, he is seen to capture stories using welded metal sculptures. The most grandiose in the exhibition is one dubbed “Domestic Violence”. This piece depicts intimate partner violence whereby a woman physically attacks her spouse with a mwiko (wooden spoon) in hand.

Others include a journalist outfitted with a camera, a chaotic Beba Beba tavern, a juggling entertainer, a Rastafari holding a guitar- among others.

I will be doing populists injustice if I go without mentioning the man of the hour. George Luchiri Wajackoyah was a wild-card presidential aspirant in the 2022 Kenya General Elections. He made his debut appearance in politics with an outlandish pro-pot agenda. Other eccentric ideas perpetuated by him and his Roots Party include the exportation of hyena testicles and dog meat. Wajackoyah is undoubtedly having a main character moment in this exhibition as you can spot him in several of the pieces. One painting is even called “Wajackoyah’s Believe”. 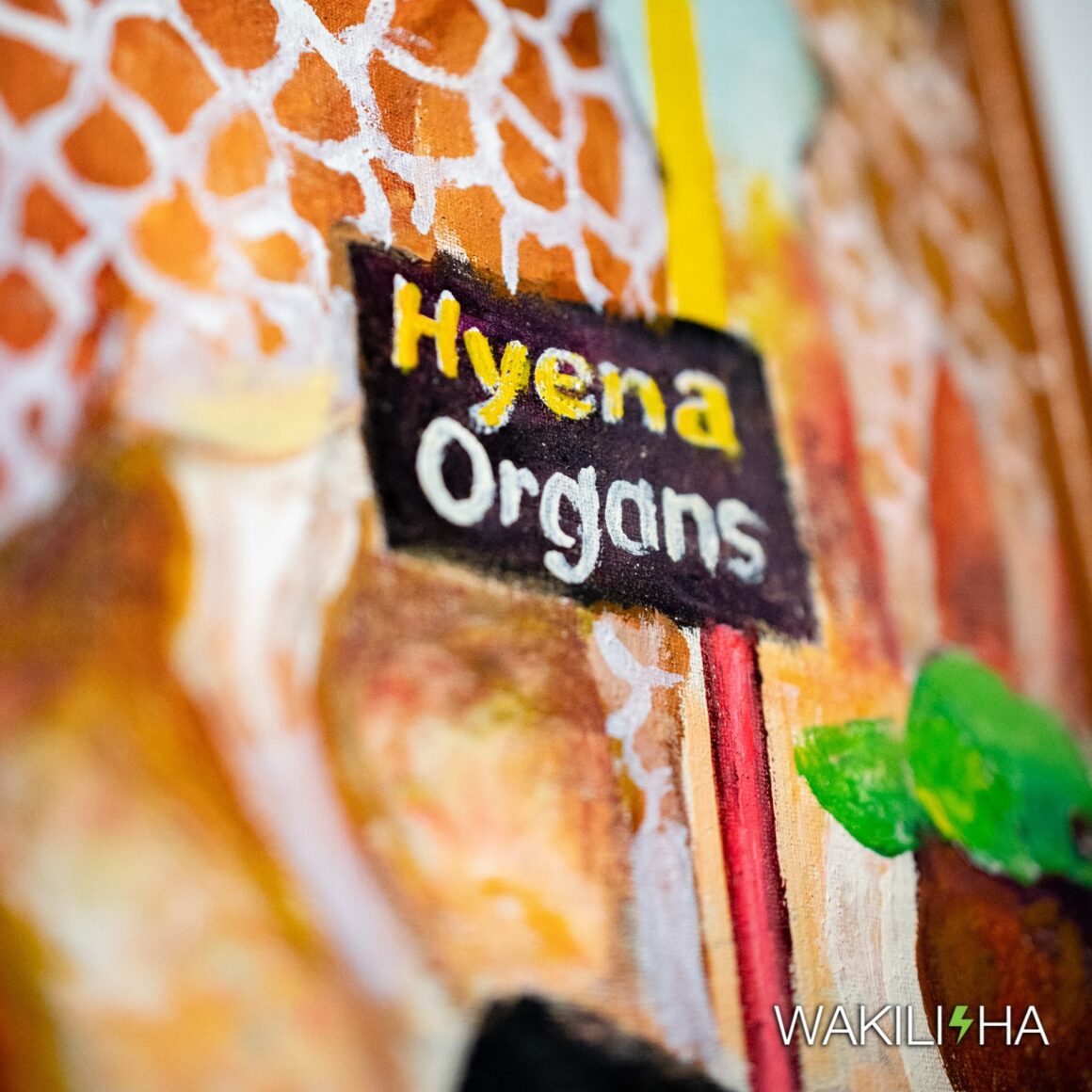 Joseph Mbatia (Bertiers) captures the 2022 Kenya General Elections with a candid eye and authenticity. His work is honest, uncensored and brutal.

“Bertiers weaves a multitude of stories and hysterics that stretch into infinity.”

All things considered, the piece that takes the day in my books is one tagged ‘Under Construction’. 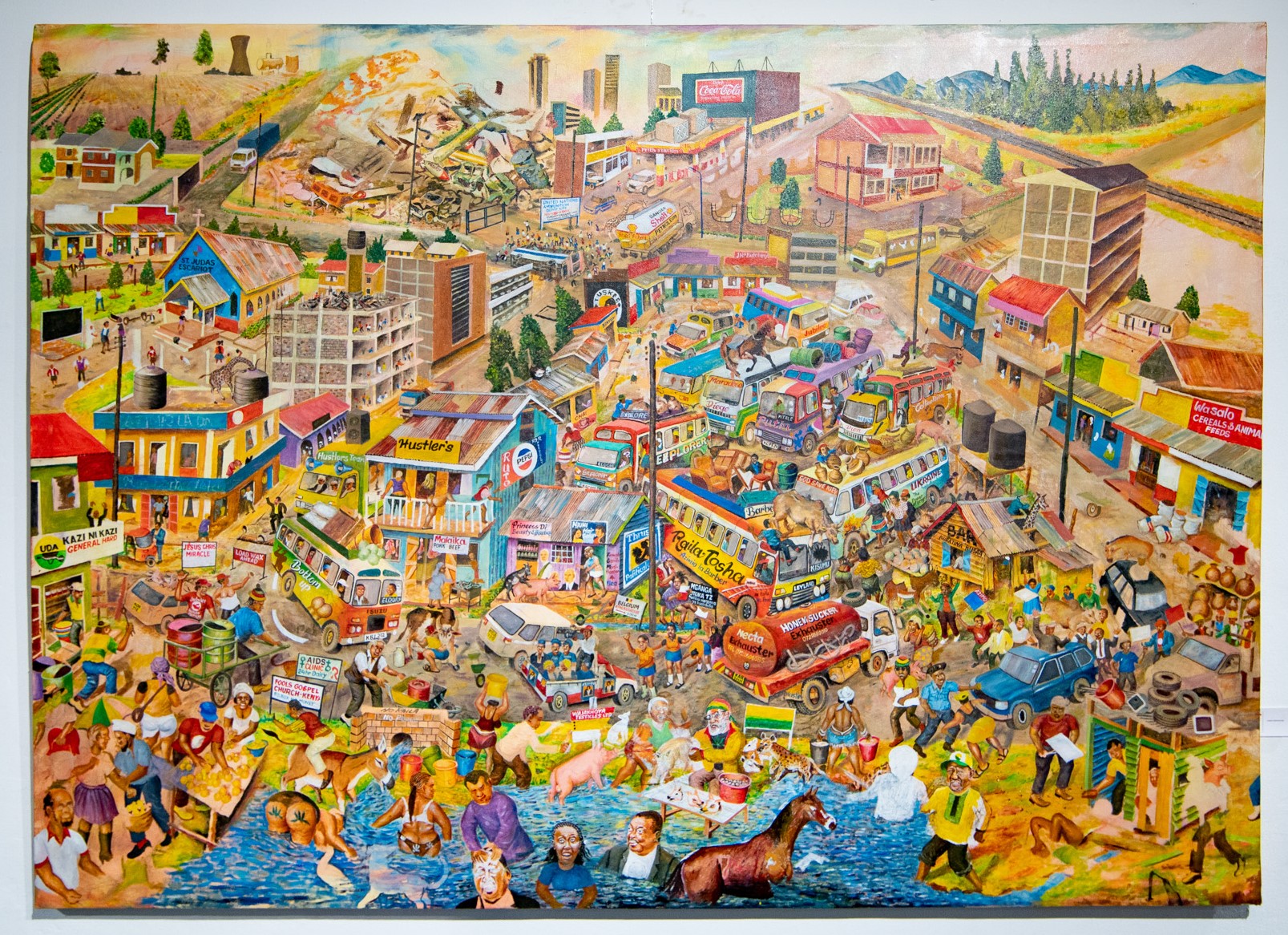 The delicate details of this majestic, larger-than-life painting are astounding. A true embodiment of Bertier’s take on art. Discerning figures in Bertiers’ intricate pictorial illusions is what makes art aficionados admire his work. The painting offers the audience an opportunity to do just that. It is the largest painting in the whole exhibition. Illustrious and vibrant, it demands to be seen. Joseph Mbatia weaves a multitude of stories and hysterics that stretch into infinity. Despite it being a work in progress still, this gigantic nameless artwork is nothing short of glorious. He reiterates that it has taken him four months to paint it, and is still not finished. I can only imagine what more he has in store for this piece.

What is the price tag on these works? All I can say is,” Art pays folks!” Given the amount of skill, attention to detail and all-around brevity it has taken Bertiers to come up with these pieces, it is only fair that we give the devil his due.

The Sarakasi za Siasa exhibition is best experienced in person. No amount of words can truly capture its full essence. Art is derivative. To each, their own meaning. I duly urge you to go feast your eyes, engage your mind and fill your soul with the Unadulterated Experience of Kenyan Politics, Art and Society by Joseph ‘Bertiers’ Mbatia in his prolific exhibition, Sarakasi za Siasa- happening at Alliance Française de Nairobi. The exhibition runs up until 28th August 2022, being extended from the initial closing date of 31st July 2022. 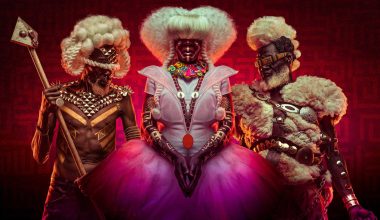 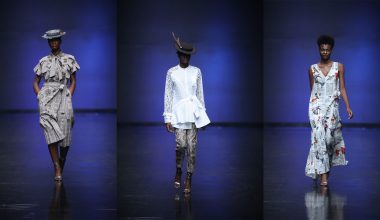 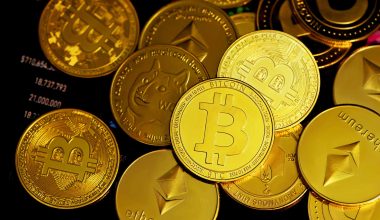 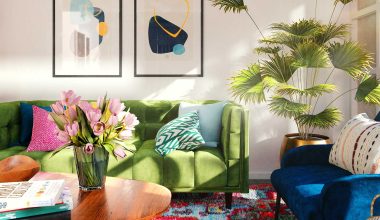 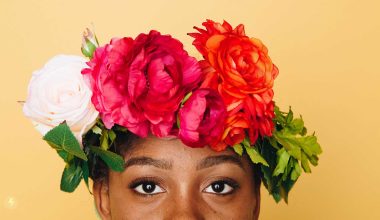 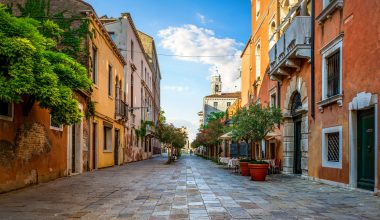 After a 3-years hiatus, the Venice Art Biennale returned in 2022 and has been underway since April. Organized…
Back to top